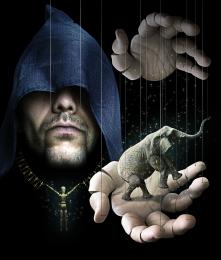 By the light of its master's incandescent neckpiece, the creature pranced under a looming palm, brought to life by the Mystic's strings.

An entry that pretty much evolved as I worked on it. I orginally planned it to be a steampunk-style entry but it turned into something slightly different. Enjoy! It seems that the mouse was quite the sailor back in its day... http://www.pxleyes.com/photoshop-picture/4bc8696c4f57b/Stop--Please-.ht...

Well, here you go: the source photo was of a hand playing a piano. Unfortunately, I couldn't think of anything else, so I simply made the same thing: a hand playing piano. Only much more literally. Comments and criticism are much appreciated. Thank you very much to bas3ssen (http://www.sxc.hu/...

My rendition of the mythical giant mountain bird known as the Roc. (http://en.wikipedia.org/wiki/Roc_(mythology) Comments and criticism are much appreciated. Thank you. 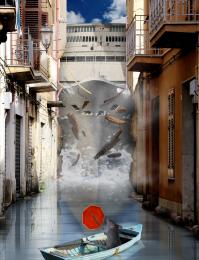 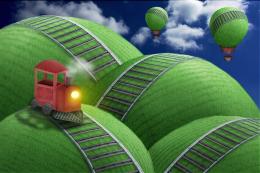 I originally planned to do something entirely different, but then this surreal little scene popped into my head upon a second glance at the picture... Train is made from scratch, with parts from source pic. Tracks, hills, and hot air balloons are all pure source, except for a couple of texture br...

The ultimate ninja! Can you catch a flaming arrow? Slice a watermelon in mid-air? Break a plank of wood with your foot? All at once?? Some photos used are my own. All external sources used are mentioned, see SBS for my photos.

Beam me up, Scotty...no intelligent life detected. SBS will be added.

Atlas and the Tennis Ball

A forgotten piece of Greek mythology... Thanks to Wikipedia for the stature image. Thanks to this tutorial for some techniques for making photos more dramatic: http://psd.tutsplus.com/tutorials/photo-effects-tutorials/how-to-turn-humdrum-photos-into-cinematic-portraits/ SBS will be added soon.

Raiders of the Lost Ball

A rare photo of a crop circle in the making... Spaceship was made from scratch. Parts include a helicopter hull, airplane wings, and a vacuum hose as the tractor beamer (is that even a term?).

Shadow by the Pond

A shadow enjoying a picnic by a pond. :) No external sources used. Homestead: House and field in background; pond made from grass of field. Shadows: Lone shadow by the pond. Mogen Davi: Wine, bread, and glass on picnic cloth. Keypad: Patterned into picnic cloth. Paper boat: Paper boat...

"Would you like some tea?" A complex photoshopping result...I divided the man's face and mirrored it to make him turn forward.

An entry that evolved as I was working. I originally only thought to put the camera in the field, but realized that it was too lame and thought to add another camera perhaps in the distance, facing the first-person camera. After being unable to find a suitable stock photo, I added a squirrel insetad...

Now here's someone I wouldn't want to play cards with...