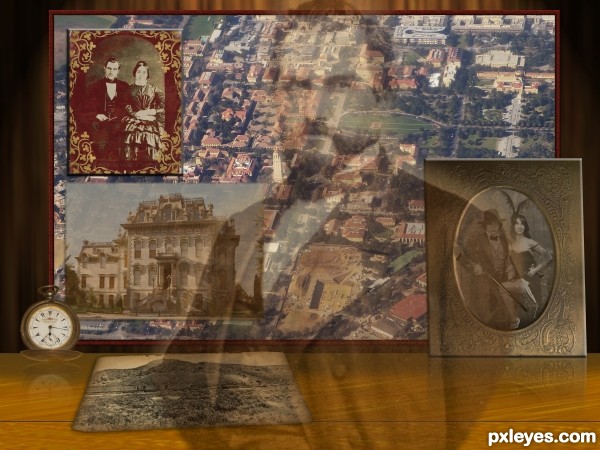 The Gingham Dress, a true story by Malcolm Forbes.
A lady in a faded gingham dress and her husband, dressed in a homespun threadbare suit, stepped off the train in Boston, and walked timidly without an appointment into the Harvard University President's outer office.
The secretary could tell in a moment that such backwods, country hicks had no business at Harvard, and probably didn't even deserve to be in Cambridge.
"We'd like to see the President," the man said softly. "He will be busy all day," the secretary snapped. "We will wait," the lady replied.
For hours the secretary ignored them, hoping that the couple would finally become discouraged and go away. They didn't, and the secretary grew frustrated and finally decided to disturb the President, even though it was a chore she always regretted.
"Maybe if you see them for a few minutes, they'll leave," she said to him. He sighed in exasperation and nodded. Someone of his importance obviously didn't have the time to spend with them, and he detested gingham dresses and homespun suits cluttering up his outer office.
The President, stern-faced and with dignity, strutted toward the couple. The lady told him, "We had a son who attended Harvard for one year. He loved Harvard. He was happy here. But about a year ago, he was accidentally killed. My husband and I would like to erect a memorial to him, somewhere on campus."
The President wasn't touched, he was shocked. "Madam," he said gruffly, "we can't put up a statue for every person who attended Harvard and died. If we did, this place would look like a cemetary."
"Oh, no," the lady explained quickly. "We don't want to erect a statue. We thought we would like to give a building to Harvard." The President rolled his eyes. He glanced at the gingham dress and homespun suit, then exclaimed, "A building! Do you have any earthly idea how much a building costs? We have over seven and a half million dolllars in the physical buildings here at Harvard."
For a moment, the lady was silent. The President was pleased. Maybe he could get rid of them now. The lady turned to her husband and said quietly, "Is that all it costs to start a university? Why don't we just start our own?" Her husband nodded.
The President's face wilted in confusion and bewilderment. Mr. and Mrs. Leland Stanford got up and walked away, traveleling to Palo Alto, California, where they established a university that bears their name, Stanford University, a memorial to a son that Harvard no longer cared about.
You can easily judge the character of others by how they treat those who they think can do nothing for them.
When I clicked on the link at Wiki that Waz included here, and came upon the name Stanford, I was intrigued and kept reading. You see, my ex's grandfather was a Stanford (for real), and though they may not be related, it's fun to think they might be. Leland Stanford was a merchant, businessman, worked in a law firm, was one of the first four involved with the Transcontinental Railway, and eventually quite the philanthropist. Albert was his real name, Cody was his nickname, and Sam (for Samantha) was my nickname. His family always called me Sam - why is another dusty old story. What if time were reversed, and Cody and Sam were Leland's grandparents?? See SBS for details. (5 years and 2478 days ago)

That's great, posting the story with your image, really liked it. But I would thoug prefer the image without the ghost-guy...

Thank you for your comment, Guilia, but the low opacity image of Mr. Stanford represents his spirit - as it is still there in the University.